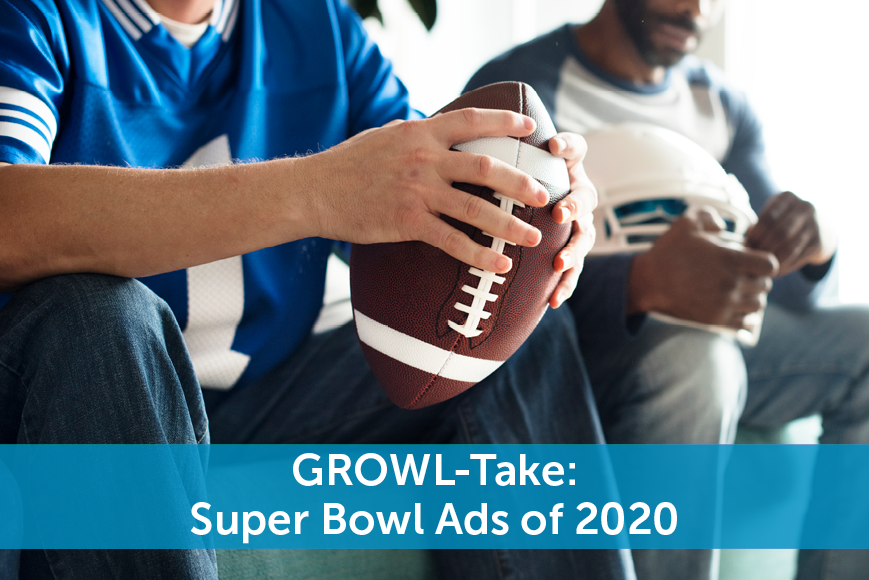 The 2020 Super Bowl – aka #BrandBowl, America’s biggest night for ads – has come to a close. Super Bowl 54 was one for the records, with 102 million viewers, 50 advertisers, 38 parent companies, and an estimated $435 million in-game advertising revenue for Fox. We saw the largest airtime in history from paying sponsors, meaning there were 42 minutes and 40 seconds of paid ads (51 minutes and 15 seconds total if we count the unpaid spots from Fox and NFL). Regardless of the industry, we saw brands push their story, messaging, and integrated communications – with so many commercials to consider, here’s our GROWL Take on the top Super Bowl ads of 2020.

In 2020, we saw tech promote human connection, and joke about the pre-Alexa dark ages, while food made offerings from dancing with Doritos to Pepsi Black. Big automotive names like General Motors and Hyundai brought in big names and even got electric. But, before jumping into our first-round picks, let’s brief the 2020 ad playbook.

– Auto Manufacturers led all industries in ad spending with 7.5 minutes of commercials (equal to $77 million)

– Tech was a close second, spending $51 million for their 5 minutes

Super Bowl 54 was also the year of the rookies – Facebook, Walmart, Little Caesars, Sabra, Quibi, and politicians all ran their first-ever campaigns (true, in the past politicians have run state-local Super Bowl ads, this marked the first time campaigns targeted the entire viewing audience).

In today’s world of marketing, the best ads are those that go beyond the screen. They convey a message, further brand connection, and have additional paid/earned/owned media interaction. This year, we enjoyed watching brands take to the Tweets & drive cross-channel interaction with users and brands alike.

For the first time ever, P&G broke brand seclusion ranks to bring its various lines together for one single Super Bowl ad. To make the commercial even more interesting, its consumers chose “their own adventure” to help shape the game day storyline. While it was an effort to “merge the ad world with other creative worlds,” according to P&G chief brand officer, Marc Pritchard, the ad seemed to miss the messaging mark. Although GROWL liked the interaction and raising the veil of parent-brand ownership, the story of connection wasn’t that strong.

Amazon brought Ellen and her wife, Portia, into the world of Alexa – alluding to a world without her. Unlike other tech giants (*coughFacebookcough*), Amazon took no shame in deeming the world of AI and voice activation a dominant force. Not only did this commercial bring humor to the screen, it subtly promoted Amazon’s Echo Auto while furthering a message of family and connectivity.

As a rookie Super Bowl advertiser, Facebook produced a well-represented tech ad. Unlike Amazon’s unforgiving world without Alexa, Facebook encouraged users to find their tribe and personal connection through Facebook Groups. This commercial played off of the musical elements and ad title (want to rock), bringing all types of social groups and subcultures together. From Rock Buggies to Rocky Balboa, Facebook offered a group for “whatever you rock.”

Tide took-part in an incredible, integrated commercial campaign that truly highlighted the power of cross-promotion. As a first half sponsor, Tide brought stain procrastination to light through various scenes. By activating Charlie Day (a huge comedic personality) as the ad’s spokesperson and having him travel through time and pop-culture (i.e., Bud Light’s Dark Ages or the 80’s with Wonder Woman), the focus on “later” was even more effective. Furthermore, this commercial flips gender stereotypes; rather than acknowledging the female roles as responsible for laundry (and removing stains asap), throughout the 4-part series, Day is the only one concerned about the stain; whereas, the women are content with doing “laundry later.”

Produced by Vayner Media and directed by Michael Bay, combined pop-culture and celebrities to promote Hard Rock and JLo’s halftime performance. Not only did the chase scene capture all of the features at the Hard Rock Hotel, but it also emphasized a when you’re here, you’re famous mentality, leading to their “Visit HardRock.com for a chance to live like JLo” CTA. Additionally, the commercial was perfectly placed as a teaser for JLo’s halftime performance, with “Mr. 305” (Miami’s beloved Pitbull) telling her to own the night.

As the only ad to play-off of Super Bowl landing on Groundhog day, Jeep was an undoubted winner in this year’s Brand Bowl. Jeep brought in Bill Murray to live, and relive, his role in the 1993 film with a twist – the 2020 Jeep Gladiator. Jeep’s commercial appealed to a broad audience because it brought a new twist to a nostalgic classic. Through the ad, Murray ultimately wanted to relive Groundhog day, solely because of the Gladiator.

This year, Google was a real tear-jerker. Similar to Facebook, Google accentuated the everyday connection that is derived from using its technology. With Google Assistant, a man remembers the love of his life with “Google Remember” prompts. Not only did Google bring memory loss to light, but it also broke the stereotype that only Millennials (and Gen Zs) use technology. But, this ad’s raw authenticity is why it made our list. Google used one of its employee’s 85-year-old grandfather to tell his personal story (yes, Loretta was real). From the voiceover to the laughs, memories, and Loretta herself – Google presented something genuine. In today’s world of marketing, as consumers continue to prefer personal connection (and put over 90% of their trust influencers over brands) authenticity is critical. However, Google did fall a little short in its social media promotion of this ad. As emotionally connective this commercial was, Google’s initial announcement simply asked users to check out their Super Bowl ad.

Doritos has always produced iconic Super Bowl ads, and 2020 was no different. The commercial created a “Cool Ranch” location, playing off of multiple meanings behind “ranch,” featuring new-age country icon Lil Nas X and the notorious Sam Elliot. Doritos also modernized a western face-off from a shootout to a dance-off – clever, because it opened the door for multichannel, interactive approaches. Although the commercial wasn’t as emotionally meaningful as Google’s, the brand leveraged both TikTok and Twitter to extend its reach. Leading up to the big game, Doritos launched a #CoolRanchDance challenge on TikTok, encouraging user-generated dance content. Although this piece wasn’t as successful as anticipated, Doritos was able to revitalize the trend on Twitter (where the real action takes place). Soon after the ad aired, Doritos Tweeted a gif of Lil Nas X dancing and challenged followers to respond with their move. Sure, general users responded, but where this ad thrived was with multi-brand action! Jake from State Farm, Chester Cheetah, and Mr. Clean were some of the first accounts to respond using gifs of themselves dancing (yes, these brand mascots all have their own personality and Twitter account). With Chester Cheetah being one of the first responses, it’s critical to consider the scope of Frito Lay’s marketing here. While these two brands likely have divisional brand managers, there was obvious strategic collaboration – though, to the end consumer, it merely seemed like brand interaction. On top of the integrated marketing, Doritos launched an AI app for consumers to create and contribute their own augmented videos (of Sam Elliot and Lil Nas X) to the challenge.

GROWL’s top pick of Super Bowl 54 was none other than NFL’s own game starter. For years, the NFL has done a phenomenal job at leveraging multigenerational and cross-cultural marketing. The organization continually brings its players together for more substantial causes, like Play 60. “Next 100” recapped NFL’s last 100 years with iconic players from the past and alluded to the next 100 years, framing our young athletes as future stars. This ad stood out because it emphasized the vast geodemographics, behaviors, and attitudes of all types of NFL fans, centralized by the common interest of the big game. What made “Next 100” our number 1 ad, was how immersive the experience was. From the youth playing a pick-up game in a field, to running the ball through city after city viewers gradually connected the dots that the kids were actually delivering the game ball to Hard Rock Stadium in Miami. But, what was unexpected (yet moderately anticipated) was when the commercial became reality. NFL’s transition from ad to live, showing the child physically run onto the field and deliver the real game ball was a master class on blurring recorded and live streaming media. Plus, the commercial promoted NFL Play 60 (all youth athletes were part of the program).

The Super Bowl was full of great ads, furthering both brand awareness and connection. Although the following didn’t make GROWL’s top 10, their successes are worth mentioning.

Another great production by Vayner Media brought well-known brand mascots together for Mr. Peanut’s anticipated funeral. Leading up to the Super Bowl, the brand did a great job of creating buzz around Mr. Peanut’s death; however, with the unfortunate Bryant helicopter accident, the ad took a hard right. From the funeral, the Kool-Aid man’s tears sprouted Baby Nut (#BabyNut). However, the cross-channel promotion with Baby Nut fell short. The brand attempted a live, augmented (and risky) feature of Baby Nut, where users could Tweet actions for Baby Nut to complete. However, the campaign’s edginess went too far with coordinated account behavior; Twitter ultimately banned three Kraft Heinz owned accounts linked to Baby Nut going viral. The accounts coordinated behavior in sharing and promoting Baby violated Twitter’s spam and platform manipulation terms of use. While the production capitalized on various elements – the associated risk and similarities between Baby Nut and Baby Yoda (and even Baby Groot) were a little too cliché.

Hulu’s great display of today’s tech-driven culture. While many brands still use spokespeople in character, the brand has been a disruptor in lifting that veil. Nearly every Hulu Sports ad features a top player stating they’re being paid to promote Hulu. What made this Super Bowl ad stand out was Hulu’s driving connection to internet rumors. In recent months, Tom Brady’s retirement rumors have traveled across social and talk shows; however, Brady’s big announcement put those to rest.

Beyond the screen, the Super Bowl brings brands and consumers together on Twitter (the #BrandBowl). During the action, successful brands extend their reach and life of the ad through social media interaction – and this year’s Brand Bowl was impressive. One major trend this year was brands creating unique, humanized account personalities for their mascots. Take a look at Mr. Clean, Chester Cheetah, Doritos, Baby Nut, and Jake from State Farm. Not only did these brands spark interaction for users, but the characters also live Tweeted during the game and interacted with each other.

The Super Bowl is the biggest day for on-screen ads. But, as the world of marketing and consumer behavior continues to evolve, brands need to think beyond the screen through an integrated, creative approach. Miss any of the ads? Watch them all here.

With COVID-19 causing millions of people around the world to work from home, many individuals are facing the same issue – coping with a new, way of connecting. One...

At GROWL, we believe in fostering community through meaningful conversations and connections. At our GROWL Connex events, we do just that by bringing local experts and...